Auction to the benefit of La Source 2016

The thread that embroider dreams

"When the Cork stool arrived in Madras, it landed among bobbins. Some were empty, some were filled with threads and one in particular was pierced with a needle. To me it was obvious that I had to create a bobbin in a big scale, which would symbolize the link between Paris and Madras that carries our dreams all along this journey" - Jean-François Lesage

For the 11th year, Jean-François Lesage takes part in the charity auction in favour of  "La Source association" orchestrated by Maître Simon de Pury, and creates this new design.

Auction will take place in Paris on Monday12th December at 8:00 pm 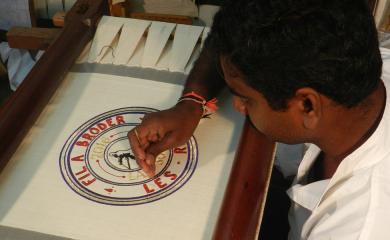